Become a Discovery Club Member and save up to $29,400 in the first three years! Learn more here! 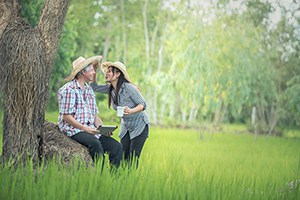 Aging is natural, but typically misunderstood. It begins in early adulthood and there are many misconceptions about it.

People don’t become elderly at any certain age. Physical and cognitive health play a big part of when someone enters the “elderly” stage.

Traditionally, 65 has been considered the beginning of old age, but as life expectancies continue to expand, this may no longer be based on biology.

So how do you know when you’re entering the elderly stage? There are three different answers:

What is “Normal” Aging

As people begin to age, they may start to wonder whether the signs of aging that they’re experiencing are normal. As we said, everyone ages differently, so “normal” has a broad spectrum. Changes in eyesight, wrinkles, skin discoloration, and graying hair are all considered part of the process of aging.

There are some changes that occur that can be slowed or reversed with proper care. Tooth decay and loss, for example, can be combated with regular trips to the dentist, eating healthy foods, and brushing the teeth twice per day.

Cognitive function deterioration is another aspect of aging that is considered normal across the board. A mild decline is normal and can bring along symptoms like forgetfulness and decreased attention span.

It can sometimes be difficult to know if the changes we go through as we age are normal or part of a more serious health condition, such as diabetes or dementia. If you have concerns, speak with your doctor.

You’ve probably heard the phrase, “aging gracefully.” It’s a common phrase, but it’s becoming less common in the United States due to unhealthy lifestyles. As many people age, they want to be active and independent while keeping their physical and mental health.

It’s difficult to do with a harmful lifestyle, though. Here are some steps to take to promote aging healthfully:

The sooner this type of lifestyle is adopted, the better, but it’s never too late to start. It’s a great way to give yourself a form of control over what happens as you age.

In the United States, studies have shown that life expectancy and quality of life is increasing for citizens:

A man born in 1900 could expect to live 46 years and a woman, 48 years. Today, men can expect to live more than 76 years and women, 81 years. Women live an average of 5 years longer than men in most cases, which hasn’t changed much despite the changes in women’s lifestyles and stress levels in the late 20th and early 21st centuries.

Although there have been increases in life expectancy, maximum life span has changed very little since the beginning of recording lifespans. Even with the best genetics and the healthiest lifestyle, the chances of celebrating your 120th birthday are slim to none. The oldest recorded lifespan was that of Madame Jeanne Calment, who lived for 122 years (1875-1997).

Aging doesn’t have to be negative. There are many misconceptions about it, but once it’s well-understood, it can be thoroughly enjoyed.

Studies have shown that people over age 65 are happier and more fulfilled than they were when they were younger. Many enjoy their retirement by volunteering, spending time with their children and grandchildren, and participating in leisure and hobbies they didn’t always have the time to enjoy.

Want to learn more about senior living at its finest? Give our team of care professionals a call today to chat about your options.